The Transit Hub planning studies were identified by the Efficient Task Force as a way to work with communities to create vibrant transit hubs around existing train stations and/or stops, while supporting the community’s goals for economic development, land use, access to jobs and cultural development. The studies would be carried out by the APA-NJ Chapter, in partnership with NJTPA, the Rutgers. The APA-NJ Chapter’s Community Planning Assistance Program (CPAP) would organize teams of volunteer planners to work with the selected local communities on Transit Hub Plans.

A transit hub is defined as an area surrounding a transit station – bus, train, light rail or ferry – that contains diverse land use, a variety of activities, and multi-modal transportation connections. Ideally, transit hubs are walkable, vibrant, culturally interesting places, with lively, active public spaces and a rich mix of amenities. They can include a wide variety of transportation options, while meeting the needs of local residents, visitors, and other station users. Transit hubs can be in urban, suburban, or rural communities, and can be in large, medium sized and small communities.

A selection committee comprised of volunteers from the Efficient Task Force reviewed 21 proposals from communities in Northern New Jersey. They selected three areas: the Dunellen Train Station in Dunellen, NJ, the Main Avenue Bus Hub in Passaic, NJ, and the Watsessing Avenue Station, in Bloomfield NJ. Each of these projects are described below. Links to the final products are also included. 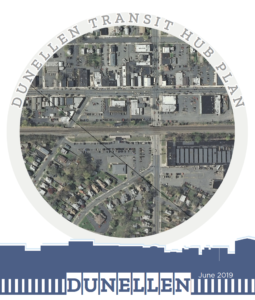 The Borough of Dunellen occupies about one square mile of the northwest corner of Middlesex County in central New Jersey. The community is served by the Dunellen Train Station on NJ TRANSIT’s Raritan Valley Line. The station is centrally located in Dunellen, in the heart of the community’s central commercial area. The study area for this transit hub study is bounded by Jackson Ave to the east, New Market Rd and Grove St to the south and Madison Ave to the west. This area includes designated redevelopment areas, residential, commercial and public facilities.

A strong effort was made to hear from the general public about what they would like to see happen in the future. A survey was employed to ask the question “What kind of community do you want at the transit hub?” Other outreach efforts included two public events, communication through social media platforms, interviews with key stakeholders, and the administration of two surveys.

The study area contains a variety of uses, including the Dunellen Public Library, a commuter parking lot, which is managed by the Dunellen Parking Authority (DPA), a bank, post office and a gas station. There are also additional parking lots immediately next to the station that are owned by the town and used for parking for borough hall and the police station.

Across Washington Avenue from the train station is the former Art Color Printing Company on a 19-acre property. The site is being redeveloped as a mixed-use project with housing and retail space.  Additionally, the borough has been designated a Transit Village, and the Council created the Dunellen Downtown Management Organization and the Dunellen Arts and Culture Commission. The Borough was working with a graduate class at the Edward J. Bloustein School of Planning and Public Policy at Rutgers to identify the best economic development strategies. The Transit Hub team worked closely with them to ensure that economic development was an integral component of the transit hub plan.

The historic Watsessing Avenue Station is located along NJ Transit’s Montclair-Boonton Line, offering weekday Midtown Direct access to New York Penn Station in as little as 30 minutes. This is one of two rail station in Bloomfield. The other is the Bloomfield Station in Bloomfield Center. Located in the southern end of Bloomfield, Watsessing Avenue Station is close to various commercial, industrial and residential neighborhoods including portions of neighboring East Orange, making it accessible to many commuters from both municipalities (See map below).

The Township is working to revitalize the neighborhood surrounding this station with large-scale and small-scale residential projects within a short walking distance from the station. The recently completed Parkway Lofts containing 361 apartments, straddling the Bloomfield/East Orange border.  About 160 townhouse units are expected in Phase II of this project. The Grove at 192, a former Hartz Mountain factory site, was redeveloped with 336 residential units and several retail businesses. Four smaller condominium buildings, with 12 to 17 units each, have been built within walking distance of the station. Also, a larger project with 165 units has been approved by the Planning Board. A former Westinghouse site atop 17.5 acres and adjacent to the train station will also be developed as a residential and commercial mixed-use project. It is the hope that these developments will be a catalyst for private investment in a pedestrian-friendly environment, providing easy access to the rail-line. Several NJ Transit bus routes crisscross the area giving mass transit riders options for travel.

The area lacks the robust and vibrant energy needed for a thriving transit hub. There are few activities that draw people to the area. This causes a loss of potential economic growth for the area and hurts the businesses already located there. As a result, there are several vacant stores in the area. A safe walking environment is needed to encourage people to use the train station and go to the businesses in the area.

The team of volunteers on the Watsessing Avenue Transit Hub Project were: 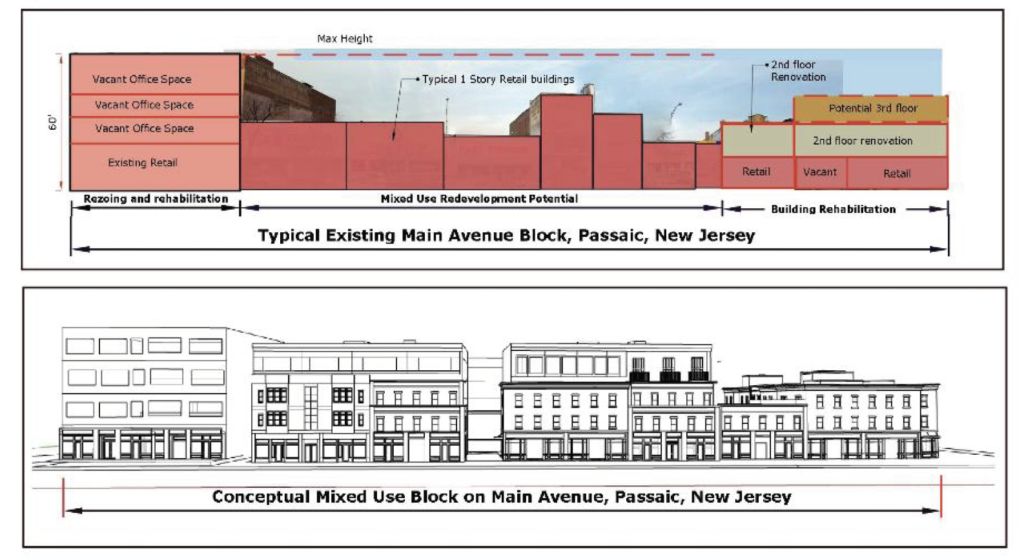 The NJ TRANSIT bus depot at Main Avenue is one of two transportation hubs in the City of Passaic, providing bus andjitney service to many local and regional destinations including Newark, the Hudson River Waterfront, and New YorkCity. The bus station area is highly active and serves as the nucleus of the City of Passaic’s Central Business District(CBD). Within the CBD are approximately 500 businesses, consisting primarily of small retail shops such as variety stores, bodegas, beauty and nail salons, restaurants, and travel agencies. Some larger retail shops (athletic apparel,clothing, 99 cent stores, etc.) are also scattered throughout, as well as some professional health and service providers.The CBD benefits from a supportive community, a youthful and growing workforce, low crime rate, and a strong commercial and residential real estate market. It also has strong potential for growth in the areas of ethnic goods, services, and restaurants.

The City has accomplished several key steps in its efforts to strengthen the area surrounding the bus depot. It hasreached an agreement with NJ TRANSIT to move its existing bus depot two-and-one-half blocks further south; severalmajor redevelopment projects on Main Avenue have been completed; $400,000 have been invested in landscaping and benches, shelters, brick paving, and attractive fencing.  Also, several abandoned or endangered properties now contain modern, attractive, and mixed- use buildings, which are attracting new businesses to the area.

The City is transforming Main Avenue into a transit-oriented hub, with a greater mix of commercial and residentialuses.  To guide this process and receive assistance in maximizing its available space, the City submitted a proposal for technical assistance from the TNJ Transit Hub Program. There are many large spaces with mixed-use potential. Inaddition, the City sought assistance in determining how to best use the underutilized, mostly vacant floors above retailbuildings. These sites are major assets that, if appropriately used, can transform its CBD into a highly desirable transit hub.

The benefits of the realization of this transit hub could be dramatic, increasing the CBD’s customer base, adding vitality to the CBD in the evening, and improving neighborhood safety. These factors in turn could help support the burgeoningconcept of Passaic’s CBD as a destination area for international goods, services, and restaurants. For an economicallydistressed City, where a staggering 31.6% of its individuals live below the poverty line, these economic benefits arecrucial.

In addition to realizing these economic goals, pedestrian safety in the area is an ongoing complaint, due to a lack ofcrosswalks, confusing intersections, the configuration of parking areas within the wide expanse of Main Avenue, andconflicts with automobile, bus, and jitney traffic. Existing small businesses largely cater to the walking public, so creatinga more pedestrian-friendly hub is crucial to the sustainability of the area.

The team of volunteers on the Main Avenue Bus Transit Hub Project were: